In a celebration of all things British, Britain’s favourite cruise line, P&O Cruises, has chosen the Balfour Brut Rosé from Hush Heath Estate for the naming ceremony of its newest ship, Adonia, in May.
When the ship’s godmother, Dame Shirley Bassey, releases the bottle against the ship’s hull to name the ship officially, it will be the first time that a British sparkling wine has been used in this ancient maritime tradition.
TV wine expert Olly Smith said, “Balfour Brut Rosé is a celebration in a bottle. Gloriously refreshing with invigorating zing and plenty of finely crafted tiny bubbles, this pink fizz is a glimpse of the first rate quality on our shores. Cheers!”
P&O Cruises managing director, Carol Marlow said “It is a fabulous and fitting choice for such a celebration. With a party atmosphere onboard, it is only right that as we toast our newest ship we appreciate the fine quality of sparkling wine we now produce in this country.”
Described as “England’s most exclusive Pink Fizz”, Balfour Brut Rosé is grown on Hush Heath Estate from three classic Champagne varieties – Pinot Noir, Pinot Meunier and Chardonnay.
Hidden from the world by a giant cordon sanitaire of ancient woodland, the flavour and philosophy of Balfour Brut Rosé owes much to its historic setting. The fine soils, mild climate and long history of fruit growing, has made the Weald of Kent home to the finest vineyards planted in the UK in the last 50 years.
“My aim is to make the finest rosé sparkling wine, comparable with the great rosé Champagnes. The passion and enthusiasm by everyone involved with Balfour Brut Rosé has led to us winning a number of prestigious international awards”, said Richard Balfour-Lynn, producer.
In May 2009 Balfour Brut Rosé was awarded a Gold Medal and the first Trophy ever awarded to an English Wine in the Decanter World Wine Awards, the biggest wine competition in the world that year.
Adonia’s naming celebrations will take place in Southampton on Saturday May 21, 2011, with the maiden voyage the following day.
For details of itineraries see www.pocruises.co.uk
To contact Hush Heath Estate visit www.hushheath.com or sales@hushheath.com
Posted by Stephen Skelton MW at 00:47 No comments:

“Judgment of Parson’s Green”
English Sparkling Wine v Champagne – who will win?
The Tasters
A stellar line up of tasters (in alphabetical order): Suzie Barrie MW (Winchester Wine School proprietor who wrote her MW dissertation on Champagne), Dee Blackstock MW (Champagne and sparkling wine buyer for Waitrose), Sue Daniels (MW student and wine technologist for Marks and Spencer) Michael Edwards (journalist and author of several books on Champagne), Victoria Moore (journalist, wine columnist for the Daily Telegraph), Jancis Robinson MW, OBE (journalist and wine-polymath), Julia Trustram Eve (English Wine Producers), plus myself.
The Wines
52 English Sparkling Wines – all from award winning producers – against six non-UK sparkling wines (four Champagnes and two others). The wines were arranged in three flights: 11 Blanc de Blancs inc. Sainsbury’s excellent BdB Champagne (£18.49), 15 Rosés inc. Sainsbury’s Etienne Dumont NV £18.99) and 32 blends inc. 2 Champagnes – Moët & Chandon NV (£30.99), Sainsbury’s Defontaine Premier Cru Champagne (£19.99), Pelorus 2006, Cloudy Bay’s New Zealand vintage sparkler (£17.99) and Codorniu’s top Cava (£12.99).
All wines were served blind, the RidgeView magnum was decanted into a standard bottle and tasters were free to (and did) taste the wines in any order they wished. The Champagnes were carefully chosen; the Moët because it is the world’s largest Champagne brand, the UK’s favourite and considered by most to be the benchmark for NV Champagnes, and the Sainsbury’s Champagnes because the Blanc de Blancs is a truly excellent wine and unbeatable at the price, and the two others because they are recognised as offering superb quality and value for money. The fact that there was a 25% discount for 6 bottles or more also helped! The Pelorus vintage is one of New Zealand’s best and as it is owned by LVMH they ought to know something about making the stuff. Likewise the Cava – Codorniu – Spain’s top producer with over 150 years of experience in sparkling wine. The wines were also chosen because they were in the same price range as UK-sparklers are selling - £12.90 to £36.99.
The Results
One thing is certain: the best UK sparkling wines can more than hold their own with Champagne. Although Champagne occupied four of the top ten places, that still meant that six were English and with only one point separating the top twelve wines, it was all very close. RidgeView undoubtedly were the stars of the tasting and with their wines (I include wines they made for both themselves and their clients) occupying ten out of the top thirty wines, there is no doubt that the team is on a roll. Their win at the Decanter World Wine Awards last year (Best World Wide Sparkling Wine over £10) with the Grosvenor 2006 was no fluke. I rated their 2001 Grosvenor in magnum as my personal favourite when I tasted it at the EWP St. George’s Day tasting last year (and promptly ordered six bottles to be kept for me for a future occasion) but now having tasted the 2000 Grosvenor in magnum, I am not so sure! I need to do a comparative tasting.
The other Top Twenty winners were the other serious players – Breaky Bottom (with the only Seyval blanc-based wine in the top 20), Camel Valley, Davenport (with a great 100% Reichensteiner), Gusbourne, Hush Heath, Nyetimber, Plumpton, Chapel Down, Jenkyn Place – all regular medal and award winners and capable of making good sparkling wines in a range of styles and over different vintages.
Of course no tasting is without its losers and this one was no exception. Whilst not wanting to single out any vineyard in particular, there is no doubt that on the basis of this tasting, wines made from non-Champagne varieties fared poorly. Apart from the Reichensteiner and Seyval blanc already mentioned, ALL the non-Champagne variety wines were placed at position 26 or below and whilst there were plenty of Champagne-variety blends in the bottom half of the tasting, these tended to be the younger wines suggesting that wines made from Chardonnay, Pinot noir and Meunier often (although certainly not always) require longer in bottle to come around. Older bottle-aged wines also tend to have a better nose – scoring points even before they have been tasted – whereas a short-aged bottle-fermented wine often lacks this attribute. All of the non-Champagne multi-variety blends scored badly (all in the bottom ten) and were probably best forgotten
The Conclusions
The best producers, those using the right varieties and clones, making their wine with care, ageing them for an appropriate length of time, and putting them on the market with a dosage that both respects the wine and the sector of the market they are aiming at, can produce wines that are truly world-class and at prices that are in no way out of line with the competition. With the UK sparkling wine industry barely out of nappies, what can we achieve over the next 25 years? When you consider that Dom Pérignon was perfecting the blending and assemblage of Champagne over three hundred years ago (he died in 1715) I think we can be pleased at the progress so far. As my teachers often wrote in school reports: “good work this term, but could do better” (usually with “--- if he paid attention/stopped larking about/applied himself” added on!). So it is with English Sparkling wine. In my opinion this is only the start. As both vineyards and growers mature, as winemakers learn from their past results, the quality of English Sparkling Wines can only improve. Many, many thanks to all those growers and winemakers who supplied wines and to the tasters who crowded into my flat. I hope to make this an annual event, so watch this space.
Stephen Skelton MW
12-03-11
Posted by Stephen Skelton MW at 09:18 No comments:

Leading Champagne house Ruinart's chef de cave Frédéric Panaïotis, speaking to the drinks business at a Ruinart Champagne “Interpretation Lunch” in London yesterday, predicted a big future for English sparkling wine, saying that it will soon be a stepping-stone into Champagne for many consumers. “It often takes around 40 years for winemakers to fully understand their terroir,” he said. “Good English sparkling wine has been in production for around 20 years now and there is quite a lot of buzz about its progress in the wine industry. “Given another 20 years it will be right up there with the best sparkling wines and, although Champagne will still be superior, it will give people another drink to act as a gateway into Champagne.”

Why does he think that "Champagne will always be superior"? Typical French nonsense!!
Posted by Stephen Skelton MW at 16:14 No comments: 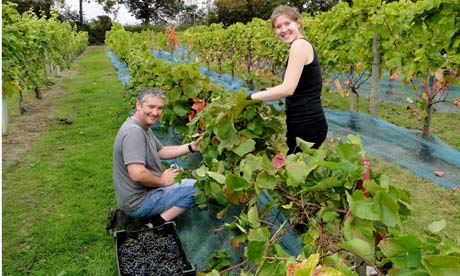